New York Democrats were pigs when it came to redistricting. Democrats control every facet of state government, and used that unchecked power to gorge themselves by carving up formerly Republican districts to all but eliminate the NY Republican congressional delegation:

Then Democrats got legally slaughtered in court, with the trial court throwing out the maps and suggesting a Special Master be appointed, which decision was affirmed by the Appellate Division and then the state’s highest court, the Court of Appeals. We covered the action in these posts:

Late last night, May 20, 2022, the trial court judge accepted the Special Master’s final proposed map, which made some changes from the maps proposed earlier in the week:

In his final maps, Cervas made several changes urged by politicians and members of the public, including reuniting the Bed-Stuy neighborhood in Brooklyn in the new 8th District, instead of splitting it between two. That caused several other districts in Brooklyn to change, including the Staten Island-based 11th Congressional District currently held by Rep. Nicole Malliotakis, which picked up the Bensonhurst neighborhood and became a stronger Republican district.

Cervas also made major changes on Long Island, creating a new South Shore-based district and shifting three others to account for it. But he left Manhattan as he proposed on Monday, keeping Midtown in the new 12th Congressional District with the Upper East and Upper West Sides, setting up a potentially explosive primary between longtime Democratic Reps. Carolyn Maloney and Jerrold Nadler.

Some members of the public, including members of the Jewish community, argued for a map that split Manhattan’s West and East sides rather than the north-south split Cervas had proposed. But Cervas wasn’t persuaded, in part because the “economic and demographic” traits of the areas on either side of Central Park aren’t as different as they once were.

A state court formally approved New York’s new congressional map late Friday, ratifying a slate of House districts drawn by a neutral expert that could pave the way for Democratic losses this fall and force some of the party’s most prominent incumbents to face off in primary matches.

The map, approved just before a midnight deadline set by Justice Patrick F. McAllister of State Supreme Court in Steuben County, effectively unwinds an attempted Democratic gerrymander, creates a raft of new swing seats across the state, and scrambles some carefully laid lines that have long determined centers of power in New York City.

Jonathan R. Cervas, the court-appointed mapmaker, made relatively minor adjustments to a draft proposal released earlier this week whose sweeping changes briefly united both Republicans and Democrats in exasperation and turned Democrats against each other.

In Manhattan, the final map would still merge the seats of Representatives Carolyn Maloney and Jerrold Nadler, setting two Democratic committee leaders who have served alongside each other for 30 years onto a collision course with national implications.

The court would first like to correct the misconception that the court’s redistricting maps are a Republican gerrymander. All three courts that reviewed this matter came to the same conclusion that the Respondents had unconstitutionally produced gerrymandered maps. The fact is that Petitioners/Republicans were successful in proving those maps were gerrymandered. However, the result is not that the Petitioners/Republicans now get to draw their own gerrymandered maps. This is not a situation where to the victor goes the spoils. The result is simply that Petitioners get to have neutral maps drawn by an independent special master as approved by the court. Unfortunately some people have encouraged the public to believe that now the court gets to create its own gerrymandered maps that favor Republicans. Such could not be further from the truth. The court is not politically biased. Yes, the trial judge was elected as a Republican, and the justices on the Court of Appeals were appointed by Democrats. The reason all three courts came to the same conclusion was because the courts applied the applicable rules of law in as fair and impartial a manner as possible.

The 2012 congressional map was drawn by a judge with the aid of a special master. That map was fair and impartial. That map resulted in eight Republicans currently being elected to Congress and over the last ten years sometimes more than eight Republicans were elected. The congressional map that was found to be gerrymandered would have only favored four Republicans being elected. The fact that this map will likely result in more than four Republicans being elected to Congress does not mean or indicate in anyway that this map is gerrymandered to favor Republicans. What this map does do is create eight competitive districts in which either party has a reasonable chance to win and three districts in which the Republicans will likely win. On the other hand the Democrats have 15 safe districts. For Republicans to repeat eight members in congress from New York in 2022 will require that they win over half of the competitive districts….

Mirroring the Judge’s explanation, this Politico analysis shows that there are only 3 safe Republican seats (down 1 from the old maps), but 7 competitive seats, which is what has Democrats upset because in a swing year Republicans may do very well in many swing districts. 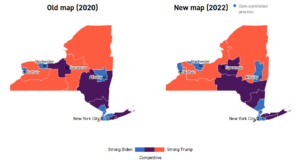 (Note: The Judge said there are 8 competitive districts, Politico says 7. That may be because the Politico analysis was prior to the release and acceptance of the final map.)

A separate Politico analysis points to the Democrat fear of the new swing districts:

A plan that Democrats enacted in February would have made them the favorites in 22 of the 26 seats, following the loss of a district due to population stagnation. Now, Democrats might have advantages on paper in 21 of the 26 districts, but their edge in several of the seats will be slim.

Ithaca formerly was in the solid Red NY-23, and now is in the swing NY-19, which was pro-Biden by 5 points in 2020, recalculated to fit the new district. That may seem like a lot, but in this environment it’s definitely a competitive district: 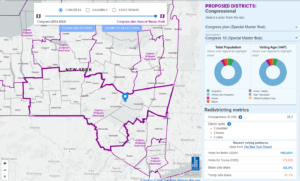 Here’s the overview of the districts statewide and in New York City: 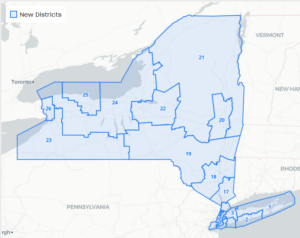 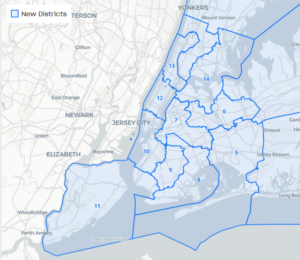 I knew redistricting was going to result in some mess, but this is just beyond anything I ever imagined. I am stunned at some of the behavior I’m seeing.

So what they’re saying is, this will not be the Summer of Love amongDemocrats?

Exactly. New York Republicans taking NY Dems to school on Redistricting. Democrats will have awful primaries all summer and will be tearing each other apart. NY Reps will be united and have easy primaries. https://t.co/Vm8ECMaPDX

Are some conservatives supporting Putin? & Calling politicians ‘the honorable’