It would be heartening to imagine that Europe’s willingness to open its doors to over 2 million Ukrainian refugees signals a sea change — a crumbling of Fortress Europe’s anti-immigrant battlements — but such belief would entail closing our eyes to examples of Europe’s ongoing commitment to severe anti-immigrant deterrence policies and practices.

We need only look to Italy, which already hosts the largest Ukrainian community in Europe and has recently welcomed over 35,000 refugees fleeing Vladimir Putin’s war. Mayors from towns and cities throughout the country laudably voiced swift willingness to bring in and settle displaced Ukrainians. At the very same moment, however, the former mayor of a small Italian town is fighting a 13-year prison sentence for having opened his town’s doors to hundreds of refugees from the Middle East and Africa.

On Monday, a coalition led by Progressive International launched a campaign to demand that the former mayor, Domenico “Mimmo” Lucano, be exonerated and that all charges against him be dropped.

Lucano was the mayor of Riace, a hamlet of 2,000 residents in southern Italy, from 2004 to 2018. During his tenure, he helped welcome 450 refugees and settle them in the tiny town. Following decades of postwar depopulation as young Italians moved away, the so-called Riace model became a celebrated example of multi-ethnic integration and renewed town life. But it was deemed intolerable by powerful right-wing elements in the Italian government — those like former Interior Minister Matteo Salvini — responsible for hardening anti-immigrant policies in Italy and the entirety of Europe.

Lucano was placed under house arrest in 2018, all public funding was cut to his programs, and he was hit with an array of bogus charges. Last September, he was convicted of fraud, embezzlement, and abetting “illegal” immigration. Alongside the extraordinarily hefty prison sentence — which was nearly double what prosecutors had originally asked for — Lucano faces fines of over half a million euros. He has announced his plans to appeal, a process that is expected to take a year.

“Under the banner of ‘Italians First,’ the forces of reaction have targeted our town and the model of hospitality that we fostered.”

It should not come to this. The charges should be immediately dropped and convictions voided. Progressive International’s campaign also demands an investigation be undertaken by the European Court of Justice and relevant Italian authorities into the connected interests that led to Lucano’s original indictment. This case represents a fascistic effort to criminalize those who threaten Europe’s racist border regime.

“Over the course of these 14 years, Riace became a beacon of hope for the dispossessed peoples living in Italy, and a source of inspiration for sanctuary cities around the world,” said Lucano in a statement released Monday. “For these crimes of compassion, we have been persecuted. Under the banner of ‘Italians First,’ the forces of reaction have targeted our town and the model of hospitality that we fostered over more than a decade.”

There can be little doubt about the political nature of Lucano’s charges, convictions, and the severity of his sentence. It can be no accident that he was arrested just one week after Salvini, the former interior minister, announced a series of brutal anti-immigration measures, including slashing funds to the very sort of integration efforts that defined Lucano’s policies.

The former mayor, who had been a schoolteacher before entering politics, implemented the Riace model during his time as a town council member and, then, over three mayoral terms. He was first inspired to make Riace a home for displaced people when he spoke to Kurdish refugees arriving in Italy in the late 1990s. As mayor, he gained international recognition finding homes, resources, and work for primarily Black and brown migrants fleeing conflict and other intolerable circumstances.

“The issue of immigration became the driving force and the mission of all local governance,” said Lucano in an interview with Progressive International, which was shared exclusively with The Intercept. “There was hope. I believed in an opportunity to contribute to improving the world.”

According to Lucano, Riace became the target site of an ideological war, a “metaphor for a clash” between those who would insist on the genocidal project of white nationalism and those, like Lucano, who reject racist border logics. “On the one hand, there is the idea of brotherhood, of solidarity, of spontaneity,” he said. “On the other, is the idea of egoism. There is the idea of ‘we come first,’ which is a terrible thing for humanity. It is unacceptable that one can say, ‘I come before another human being.’”

Salvini and his fascistic Northern League party saw a profound threat in the Riace model’s success: By white nationalist lights, a town is better dilapidated and abandoned than revived as a home for nonwhite migrants. At the time of the arrest, Salvini accused Lucano of “colonizing Italy with migrants.” Hundreds of migrants who had settled in Riace were moved out of the town into refugee centers around the country, and the government even suspended production on a TV series about the “town of welcome,” as Riace was dubbed.

“Domenico Lucano offered real hope for revitalization of Riace and for its becoming a model for others. His punishment is a disgrace,” said Noam Chomsky in a statement of support for the former mayor. “He should be released at once and helped to carry forward the important work he had initiated.” Other high-profile figures including former U.K. Labour Leader Jeremy Corbyn and former Greek Finance Minister Yanis Varoufakis have joined calls for Lucano’s exoneration.

“Domenico Lucano offered real hope for revitalization of Riace and for its becoming a model for others. His punishment is a disgrace.”

Lucano and his supporters deny all charges of wrongdoing. They have stressed the absurdity that the former mayor received the heftiest sentence for embezzlement, despite the fact that even the state admitted that Lucano did not enrich himself in any way. In the interview with Progressive International, Lucano again stressed that “as mayor I only enriched the territory,” helping create municipal jobs for newly arrived residents, “but then in the end it became a criminal offense.” The former mayor is also defiant in his rejection of the charge that he abused his power by allowing children to stay longer in refugee reception centers than the maximum six months dictated by the government at the time.

“What I was trying to do annoyed them,” Lucano said of his antagonists among the Italian authorities, “mainly because the refugee reception project in their eyes had to be perfectly in line with the set guidelines. But it is so obvious that I don’t accept kicking children out of the territory and out of the school system, and I have disregarded this with conviction.” 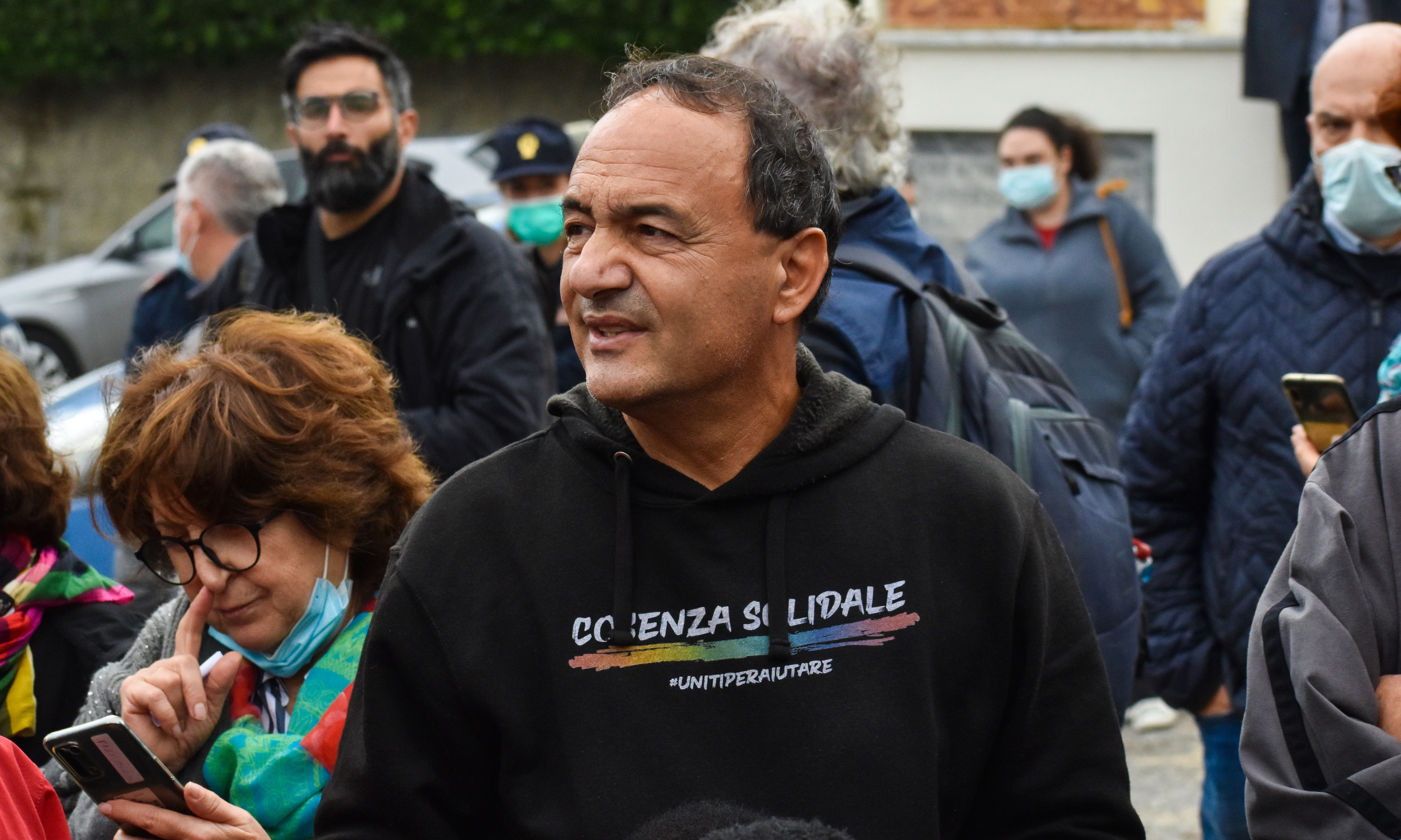 Last October, following Lucano’s conviction, Italian political theorist Donatella Di Cesare wrote that the verdict was “an explicit message against anyone who dares to imitate his example in the future. The message is that those who welcome migrants are criminals.”

What the last weeks of Russia’s atrocious war have shown is that the European Union, even its most right-wing populist elements, has been willing to shift that message. To uphold Lucano’s conviction would be to say the quiet part out loud: an unambiguous admission of European white supremacism.

The Italian government under current Prime Minister Mario Draghi has rolled back some of Salvini’s most extreme anti-immigrant regulations but has hardly turned the country into a welcoming haven.

Lucano’s case is a stark reminder that now is no time to lionize Fortress Europe or forget its victims: the nearly 20,000 migrants left to die in the Mediterranean Sea since 2014; the estimated 5,000 currently held in EU-funded Libyan detention centers rife with torture; and the humanitarians facing persecution for aiding those whom European nations deem disposable. Europe, especially Italy, has led the charge in prosecuting those who assist migrants. Lucano’s conviction is one of the most extreme examples.

If Europe’s leaders do not have the humanity to support multiracial, pro-immigrant, working-class projects like Riace, at least may they have enough shame to not jail the face of pro-immigrant leadership for over a decade.

UK’s Johnson Urges China “Get Off The Fence” On Ukraine, Warns Against Choosing “Evil”

As more faculty leave Nevada colleges, who will replace them?