The truth the media and the left doesn’t want you to see: Here is why we have skyrocketing violence

The justice system is based on deterrence through crime reporting, crime solving, arrests, prosecution, and accountability through the correctional system. Decreases in any of these measures may indicate potential concerns.

But when all plummet at the same time (arrests have fallen by more than half), it offers the best evidence as to why we have rapidly increasing violence.

Juvenile arrests dropped to their lowest level in 40 years. From 2005 through 2019, the number of delinquency cases declined 56%.

Crime reporting-crimes solved and the correctional population are all down considerably.

See charts and narratives below:

All Arrests Have Decreased From Peak Years

Federal arrests declined 42% from fiscal year (FY) 2019 to FY 2020, reaching their lowest level since FY 2001. The largest percentage decrease in arrests from 2019 to 2020 was for immigration offenses (56%), while the smallest was in arrests for supervision violations (21%). More than half (56%) of arrests in FY 2020 were in the five federal judicial districts along the U.S.-Mexico border. 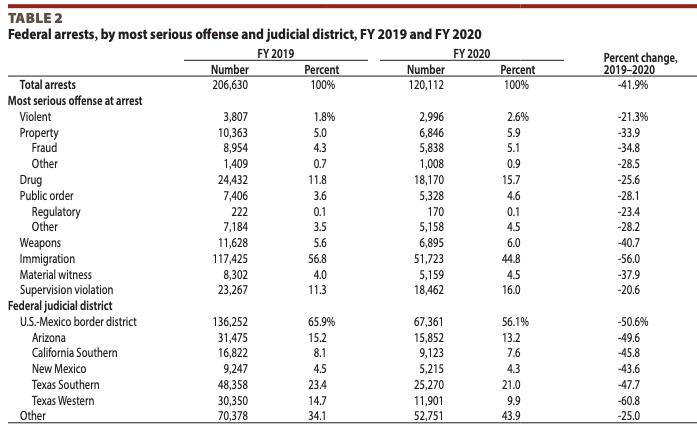 Juvenile arrests dropped to their lowest level in 40 years, according to a report released by the Office of Juvenile Justice and Delinquency Prevention and the National Institute of Justice. In 2019, U.S. law enforcement agencies arrested an estimated 696,620 youth under age 18, the lowest number since at least 1980 and 74% below its 1996 peak of 2.7 million. Juvenile arrests overall fell by 58% between 2010 and 2019, although patterns vary by demographic group and offense.

The latest available data as to all arrests is from 2020 via the FBI. I use a chart from Statista rather than create my own using data from the FBI’s Crime Data Explorer.

2020 was the beginning of COVID thus an analysis of all arrests over time will be impacted by the sharp drop in 2020. Yes, there are other factors (i.e., criminal justice reform, cops reluctant to be proactive, historical data showing increases and decreases in crime, breakdowns in family cohesion) that are not addressed here.

But data from the Office Of Juvenile Justice and Delinquency Prevention and the National Institute of Justice indicate that juvenile arrests fell by 58% between 2010 and 2019, the year before COVID.

We now have a considerable increase in violence. The number of homicides increased by nearly 30% from 2019. In 2020, violent crime was up 5.6 percent. Data from states and cities indicate that violence continues to grow in 2021 and 2022 for many jurisdictions.

But it’s not like one can pinpoint any event (i.e., COVID or the progressive movement encouraging fewer arrests or police reluctance to arrest after the numerous riots and protests regarding the use of force or the 14,000 police officers leaving the job), the most recent and sharp decline in arrests began in 2006.

There are endless media articles citing mayors in progressive cities (i.e., New York, Chicago, San Francisco) calling for greater accountability for criminal offenders through more arrests. There doesn’t seem to be any dispute that increased arrests are necessary.

The increases in violence are considerable; it began in 2015 with a 28 percent increase in violent crime and serious violent crime per the Bureau of JusticeStatistics, far before COVID. The increases since 2015 haven’t been continuous per the FBI and The Bureau of Justice Statistics. But per media reports, violence continues to increase in 2021-2022.

Only 40 percent of violent crimes are reported to law enforcement, a sharp decline from previous years. Fear of crime is at an all-time high.

In 2019, police nationwide cleared 45.5% of violent crimes that were reported to them and 17.2% of the property crimes that came to their attention. Cleared (solved) crimes have decreased over time, especially for homicides.

So to the question as to why violence is increasing in the United States, it’s a fair assumption that it’s due to the dramatic decrease in arrests-crimes reported-crimes solved, and correctional population now at all-time lows. Police contacts have fallen considerably. Recidivism (mostly new crimes per the Bureau of Justice Statistics) by former inmates and those on parole and probation are sky-high.

Possibly the most impactful hypothesis is that criminals understand that accountability has decreased considerably. Criminals aren’t stupid; they understand that their ability to commit violence and get away with it is now the norm.

The justice system is based on deterrence through crime reporting, crime solving, arrests, proactive police contacts, prosecution, and accountability through the correctional system. Decreases in any of these measures may indicate concerns.

But when all plummet at the same time, it offers the best evidence as to why we have rapidly increasing violence.