As hawkish members of both parties and the press call on President Joe Biden to pursue military involvement in Ukraine, including by implementing a “no-fly zone,” a complicated tightrope act by U.S. intelligence is receiving relatively little public attention. Current and former U.S. officials knowledgeable about the operations told The Intercept that the U.S. military has deployed extensive ISR, or intelligence, surveillance and reconnaissance, assets to countries neighboring Ukraine to monitor developments within the embattled nation. The sophisticated intelligence regime requires the Biden administration to walk a fine line in which one wrong step could spell disaster: providing Ukraine with as much assistance as possible without becoming an active participant in the war and risking a direct conflict with nuclear-armed Russia. The balance relies on the assumption that Russia will recognize and respect the United States’s compliance with its self-imposed rules.

The assets are largely aircraft tasked with flying along the borders between Ukraine and its NATO-allied neighbors, which must be careful not to cross into Ukrainian airspace. Capable of peering deep inside the country, the aircraft glean intelligence that is then passed onto the Ukrainians, according to two former U.S. officials knowledgeable about current operations. The aircraft include MQ-9 “Reaper” drones, Boeing RC-135 “Rivet Joints,” and Boeing E-3 Sentry “AWACS,” which have been used to eavesdrop on communications and collect imagery intelligence, according to one of the former officials, a retired CIA officer. A current U.S. Army signals intelligence officer said that the U.S. had deployed many of the ISR assets to neighboring countries in February, following Russia’s massive troop buildup along the Ukrainian border. Open-source flight data shows the same models of aircraft positioned over Poland, Romania, and the Black Sea.

Crossing into Ukrainian airspace could turn the United States into a direct combatant in the conflict, heightening the risk of a nuclear confrontation. The same risk surrounds the provision of certain kinds of intelligence. According to the former CIA official, the United States is only providing “finished” intelligence, meaning that it has already been processed by the U.S., as opposed to “raw” intelligence, like real-time video feeds or communications intercepts.

“The U.S. is using a variety of drone and fixed-wing collection assets to obtain tactical information of the battlefield,” the official said, adding that the intelligence is then passed on to the Ukrainians through a liaison officer. “But the U.S. is not providing real-time intelligence that would normally be provided to U.S. forces involved on the ground.”

But these distinctions are set on the United States’s own terms. And despite best efforts, there are always risks of accidents in which intelligence operations can run afoul of red lines. On Sunday, a Russian drone briefly crossed into Poland, a NATO member, leading to a warning from the alliance that it could respond with force — an alarming threat of direct confrontation with Russia. The drone was conducting the same kind of surveillance operations as the United States’s ISR aircraft do just along Ukraine’s borders.

Capable of peering deep inside the country, the aircraft glean intelligence that is then passed onto the Ukrainians, according to two former U.S. officials knowledgeable about current operations.

While the Biden administration tries to support Ukraine without allowing the United States to become an active belligerent itself, Russia may not see it this way. Russian Deputy Foreign Minister Sergei Ryabkov has already warned that the military will consider weapon shipments to Ukraine as “legitimate targets.” On Sunday, Russia launched a deadly airstrike on a Ukrainian military facility just 15 miles from the Polish border, killing at least 35 and injuring 134 people, per Lviv officials. The Russian government called the facility — where NATO has trained Ukrainian forces and where U.S. troops had been stationed up until a few weeks ago — a “training center for foreign mercenaries” and a storage center for foreign weapons shipments.

In addition to the intelligence support, the U.S. and NATO are also providing substantial arms assistance, having reportedly sent Kyiv over 17,000 anti-tank weapons in less than a week. On Wednesday, Congress approved a bill for $13.6 billion in emergency assistance for Ukraine, containing both security and humanitarian aid.  Biden announced the same day that the U.S. is sending $800 million in more weapons to Ukraine, including anti-aircraft systems, anti-armor systems, small arms, machine guns, shotguns, grenade launchers, and drones. 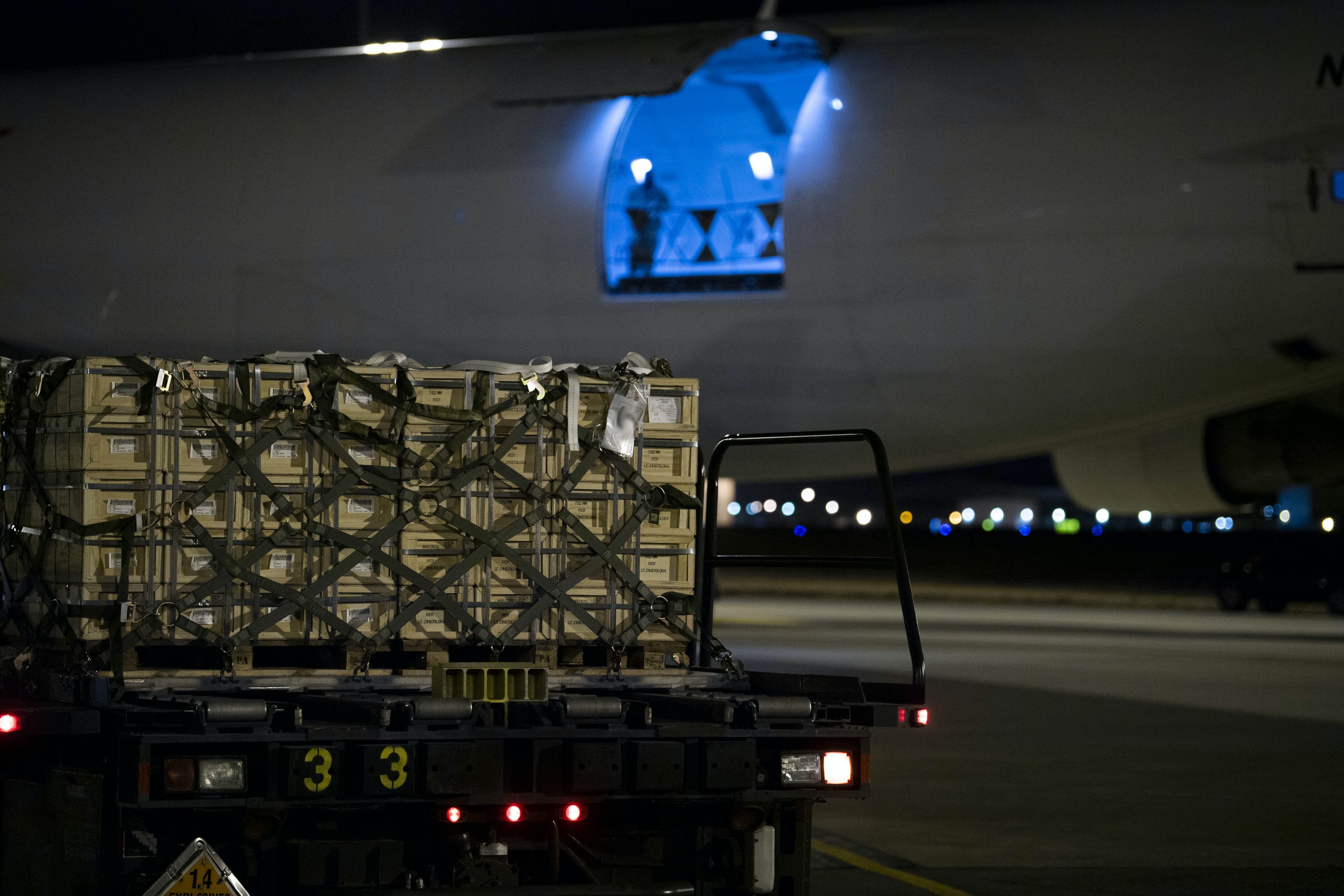 Pallets of ammunition, weapons, and other equipment bound for Ukraine wait to be loaded at Dover Air Force Base in Delaware on Feb. 28, 2022.

An MQ-9 drone pilot with the U.S. military also told The Intercept that Reapers had been deployed to the region. He said the U.S. was using MQ-9 services leased from private contractors before withdrawing them and replacing with government assets, which he said have been slower to stand up. NBC News reported Tuesday that the administration is also considering sending small kamikaze drones called Switchblades.

The U.S. has particular experience with this type of indirect weapons and intelligence assistance against Russia, having previously sent arms to Syrian rebels combating the Russian-backed regime of President Bashar al-Assad. Although Biden has called for an end to Saudi Arabia’s U.S.-backed war in Yemen, the Defense Department also gives intelligence and weapons support to the Saudi regime, which is engaged in a brutal offensive that has resulted in the world’s worst humanitarian crisis.

The United States amplifies data its intelligence can confirm, while discrediting what it cannot validate, in order to support partners in the region without being considered an active combatant, a retired U.S. Air Force general with experience leading operations in the Middle East told The Intercept. If the U.S. has information that a production facility also serves as a prison, for example, it will tell its partner that the target has other uses to be considered before attacking. (Two other retired military officers confirmed that such information-sharing functions this way.)

The United States would not, the retired general explained, share its sources and methods. The president and defense secretary decide how much collaboration to green light, and that intent is trickled down through the combatant commanders — in the context of Ukraine, the head of U.S. European Command.

Beyond these measures, the United States’s intelligence involvement in Ukraine has also included a secret CIA training program, Yahoo News reported on Wednesday. Under the program, following Russia’s annexation of Ukraine’s Crimea peninsula in 2014, a small group of CIA paramilitary officers were sent into the country to train the Ukrainians in the use of Javelin anti-tank missiles, sniper techniques, and covert communications. The report noted that the Biden administration had since ended the program, following concerns that its authorities might be too broad, and pulled all CIA personnel out of Ukraine last month under the threat of a Russian invasion. Along similar lines, The Intercept reported last week that shortly after Biden’s inauguration, his CIA Director William Burns sought to temporarily halt certain covert operations related to Russia that U.S. officials considered risky or provocative.

House Armed Services Committee Chair Adam Smith, D-Wash., has stressed that it is essential that the U.S. does not provide “real-time targeting” intelligence to Ukraine. “We have to help Ukraine in every way we can without widening the war and stumbling into World War III,” he said Wednesday on CNN.

“As we stand with the Ukrainian people, we must avoid the knee-jerk calls to make this conflict even worse,” Rep. Ilhan Omar, D-Minn., a member of the House Foreign Affairs Committee, said on the House floor Thursday. Condemning calls for a no-fly zone and other military escalation, she warned that “even in the madness of the Cold War, leaders around the world understood that nuclear war would mean the annihilation of humanity. There are voices now that are shockingly casual about the risk of nuclear war. I’m asking the American people: Do not believe them. ”

The War on Americans Continues: Main Stream Media Promotes Man As “The Woman of the Year” – Completely Backfires!

The Truth About Biden and Oil Production

The truth the media and the left doesn’t want you to see: Here is why we have…

Social media posts could lead to losing your guns, under proposed PA law supported by…